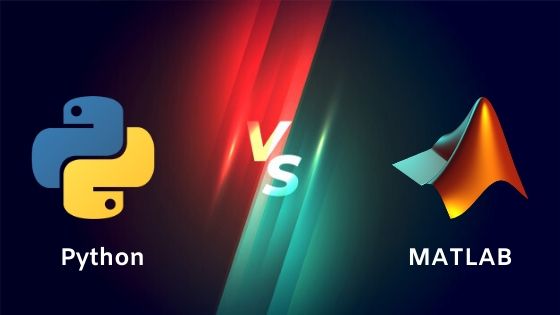 We all know that Python is getting popular in almost every field of science and technology. It is competing with most of the dominant programming languages like Java, Kotlin, C++, and many more. Python is also getting popular in the field of Big Data. But most of us still don’t know that Python is doing a neck to neck competition with MATLAB. Yes, Python vs MATLAB is becoming one of the significant search terms over search engines. Because the students want to know which one is better and why? Let’s start with the essential introduction to Python and MATLAB.

Python is one of the robust programming languages in the world. Guido Van Rossum developed it in 1991, but it got famous after the development of future technologies such as machine learning, artificial intelligence, and Big Data.

It also offers dynamic typing and provides automatic memory management. Python is quite easy to use and implement, which makes it one of the most adorable languages among the programmers. Python coding is just like plain English, and you need not learn the complex syntax if you want to code in Python.

It is an open-source programming language; thus, you can use it for free. You can also run it on any operating system. It comes with a large number of libraries, lists, and dictionaries, which is quite helpful for the programmers.

It also offers you to work with different modules. Most of the companies are using Python for various purposes, such as rapid prototyping, Web scripting, XML processing, GUI applications, etc. because of its high performance. Python is a widely used language. Python reduces development time and cost. In this way, it provides improved programming maintenance.

Matlab is the abbreviation of Matrix Laboratory. As the name suggests, it is developed to solve math problems such as Linear Algebra. The first release of MATLAB was in the year 1970s. MATLAB is not a language itself, and it is a programming interface. But most of the programmers considered it as a programming language.

Likewise, Python is also a high-level programming language and high-level scripting language. Most of the companies are using it for technical computing. MATLAB provides an excellent environment for programming, computation, and visualization. If you do have excellent command over mathematics, then you can use MATLAB effectively to solve the problems.

Because most of the difficulties in MATLAB are expressed in mathematical notations. MATLAB is known for its toolboxes. It is quite easy to use MATLAB all because of its great toolbox. You can perform a variety of tasks using its toolboxes such as control design, Image processing, Digital signal processing, and many more. MATLAB is not limited to a few functionalities.

You can expand its functionality with the help of additional toolboxes. Some of the functions provided by the toolboxes are statistical manipulation of data, data analysis, etc. In MATLAB, you can’t work with the code itself like other programming languages. Whenever you send a command to MATLAB, then the data is read, and the command is executed. You can’t control the syntax of the Matlab programming. That is the reason MATLAB is less layperson-friendly.

Python offers high-performance. It is quite easy to use Python for linear algebra, graphics, and statistics. Python offers optimized library calls, which makes its performance slightly better than MATLAB. On the other hand, if you want to improve the MATLAB performance, then you need to install, compile, and validate developer-oriented add-ons in MATLAB.

Python offers extensive support libraries to the programmers. It is an open-source programming language; thus, you can also found the online community where you can share your problems with other python developers.

On the other hand, MATLAB is a paid software. Here you can find the forum and after sale support from the MATLAB customer support.

When we talk about the speed, then Python speed is quite slower than MATLAB. Python is not designed to provide faster speed.

On the other hand, MATLAB is specially designed to provide a faster speed as compared with Python and its competitors.

If we compare Python vs MATLAB machine learning ability, then Python gets the slight edge over MATLAB. It offers a variety of libraries and packages that are compatible with machine learning.

On the other hand, MATLAB has limited features for machine learning.

On the other hand, MATLAB requires some training before using it. But after getting the training, you can use it without any hassle.

Python is widely used to develop server-side web applications. It is also used in artificial intelligence and machine learning. Apart from that, it is also becoming one of the crucial parts of Big Data technologies.

MATLAB is widely used to solve technical computing problems, mainly mathematical problems. It is widely used for mathematics, engineering, and science courses. Apart from the industries using it for high-productivity research, analysis, and development of the software.

Python is free to use for the programmers. You can use it for free without paying a single penny. All you need to do is download the Python and use it on your system.

On the other hand, MATLAB is one of the most expensive software in the world. You have to pay a huge amount of money to use it on your system.

Now we have seen the in depth comparison between MATLAB vs Python. Both Python and MATLAB have some advantages and disadvantages. But both of these languages are having great uses in the current industries. If you want to make a career in machine learning and artificial intelligence, then you should use Python.

On the other hand, if you are going to make a career in image processing and technical computing, then you should go with MATLAB. Now it’s up to use the pick the best one between Python vs MATLAB.

If you are looking for the best MATLAB online help and MATLAB help online, then we are here to provide you the best online MATLAB help.